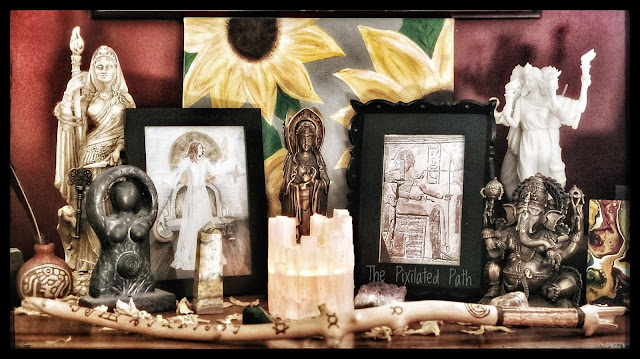 The Human - Deity Connection has been the basis of our Spirituality for thousands of years.

Although the deities, and often the ways in which we worship them, have changed, the human need for deity has not. This need to feel connected to something bigger than ourselves is prevalent in many, if not all religions. There is a primal need for answers as to what our reason for being here is, and what waits for us after death. Deity holds the answers for us and connecting with them is the only way to find out what they are.

One of the countless ways connection is manifested, in many religions, is procreation between deity and humans. Whether this procreation was brought about immaculately, or by way of a golden rain (I’m lookin’ at you, Zeus), it’s definitely a running theme.

This may seem like an unusual topic to find here but, HELLOOOO: Pixilated. Anyway, don’t go off in a huff, or anything. I may not be Christian, but things can be gleaned from all paths.

Also, Christianity is based largely on this whole Human - Deity connection thing.

Christians have cemented their connection to deity with Mary’s impregnation by God and the birth of Jesus. He is The Chosen One, the Savior who can save mankind from itself. People find comfort in knowing that if they follow the teachings of Jesus, they will have eternal peace in the afterlife.

The way I see it, because Mary was his mother, Jesus had human form and could communicate with peeps in a way they could understand, because he was one of them. As the Son of God, he held a mystical quality about him…he had knowledge the rest did not. He spoke to his Father directly, asked questions, and received messages he understood, and then passed them on to the masses in a way they could comprehend.

When he was crucified he let go of his mundane body to strengthen his spiritual body. In other words, he wiped the slate clean for all humanity and gave them the choice of how to live their lives, and in leaving his physical body behind he became a spiritual guide to the human race. He was leading by example in his selfless act - hoping to inspire his followers, as well as non-believers, to make the right choices so that they too could find themselves in heaven upon their death.

The belief in the existence of Jesus has made it easier for many people to connect with deity. Christians still pray to their God, but they also pray to Jesus, he’s kind of a “spiritual middle man” between us and The Big Guy. Some people feel more comfortable asking for assistance from him because there is a face to go with the name (albeit a historically inaccurate face).

Christians also feel connected, because they believe he endured trials and hardships - just as they do - during his time spent on Earth. This makes him easier to relate to than the faceless “All” that is the Christian God.

While Thetis, Cronus, Aphrodite, Apollo, Poseidon, and other Greek Deities are known to have offspring through romantic encounters with humans, it is usually the innumerable escapades of Zeus that spring to mind as an example of this type of Human - Deity connection.

Greek mythology is rampant with tales of Zeus’ affairs with human women that produced children, of which; Hercules and Perseus are best known. However, unlike Christians, the Greeks did not worship these half Human offspring as Gods.

While there are many tales of their heroic adventures and feats of strength, demigods were not afforded the same level of elevation as the Gods.

Upon their deaths, their spirits did not ascend to dwell with the Olympians; instead they were relegated to the Underworld to spend the afterlife amongst the spirits of the mortal dead.

Temples were not erected to honor these heroes after their deaths. Sometimes though, shrines were created so that those who wished to could venerate their fallen heroes.

I believe that in these cases, Zeus and the other Gods of Olympus were made more approachable by their romantic involvements with mortals, as well as their offspring. They obviously had a soft spot for people (especially Zeus <insert Brittney Spears’ “Womanizer” here> lol), so if you did things their way they might be more inclined to look upon you favorably.

My Personal Take on the Human - Deity Connection…

I see this connection is a little bit different. I see deity as part of everything. 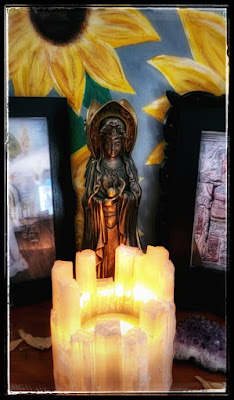 To me, Deity is what connects each of us – on a cellular level – to every other thing in The Universe.

Assuming this is true (and I believe it is) every child is, in a sense, born of both deity and humanity.

This connection is the thing that drives us to become aware of the intricate beauty of our surroundings, as well as become comfortable and familiar with the depths of ourselves. Deity is our biggest cheerleader, driving us to fulfill our greatest potential; while also being an ever-present “tough as nails” teacher, guiding and challenging us to learn whatever lessons we must to become the best version of ourselves.

For me, Deity has manifested itself in the form of the many Gods and Goddesses that make up my very diverse and eclectic personal pantheon. Each of these Divine beings called to me at different points along my path. I did not choose them, they chose me.

My highly varied personal pantheon holds the following “pairings” of Gods & Goddesses within it thus far:

These are in addition to the Deities that I have been working with for the past 8 years as a Priestess in a local coven.

After years of much reflection, peppered with many “apostrophes” (If you know, you know. If you don’t, watch Hook!) I have come to the realization that each and every one of these Divine Beings speaks to part of who I am at my core. Following them, listening to them, learning about and from them, even honoring and serving them, has helped me to get to a point in my personal and spiritual development where I feel passionate and filled with purpose about a great many things.

They have been with me, and been a part of me, since the day I was born. That realization is both humbling and empowering.

I still have much work to do, and many lessons to learn. I certainly don't have all the answers; but I have Faith that my connection with my beloved, eclectic, and quirky Divine Family will remain with me as I continue on this Pixilated Journey that is my Life.

Have your own thought or experiences on the topic that you'd like to share? Drop them in the comments! 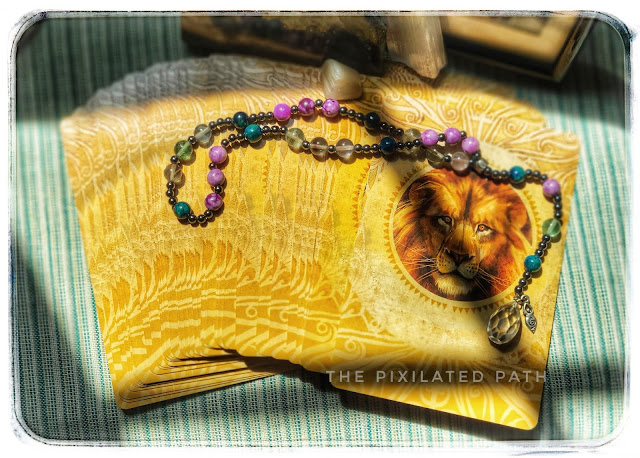 Foresight Friday: Crow Your Way into the Next Chapter of Your Story

Foresight Friday: Crow Your Way into the Next Chapter of Your Story  Divination Method: The Secret Language of Animals Oracle Cards Card(s) Drawn: Crow Key Word(s): Communication, Transformation, Story, Universal Law Affirmation: “I am a unique being Living my story, epic and true I walk my own way, to my own beat Weaving ancient wisdom into the sacred new”   My Interpretation: I like to think of Crows as the Bards of the Animal Kingdom. They are playful, friendly, creative, and love to collect things (especially shiny things). Their fantastic memories allow them to remember the faces of those who have helped them…and those who have harmed them, and to spread the tales of both to their brethren. 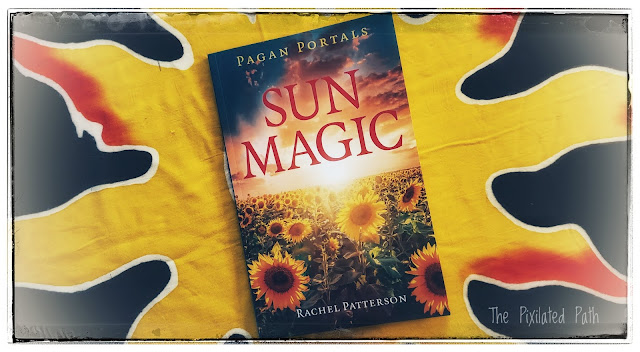 Pixie Book Review: Pagan Portals - Sun Magic by Rachel Paterson Moon Books June 28, 2019 | $10.95 Paperback | ISBN 978-1-78904-101-9 Full disclosure, before I get started: I've known the author of this book, Rachel Patterson, for roughly 15 years (this is a VERY approximate number - my brain isn't what it used to be), as we used to be a part of the same online community. I have never met her in person, as we reside on different continents, but maybe one day (fingers crossed).  Anyway, I know her to be a lovely, thoughtful, and caring human who loves her family, knows her craft, and really enjoys cake. Up until the time I set out to review this book, I had yet to read any of her work outside of Facebook posts.  With all that said, on to my review! 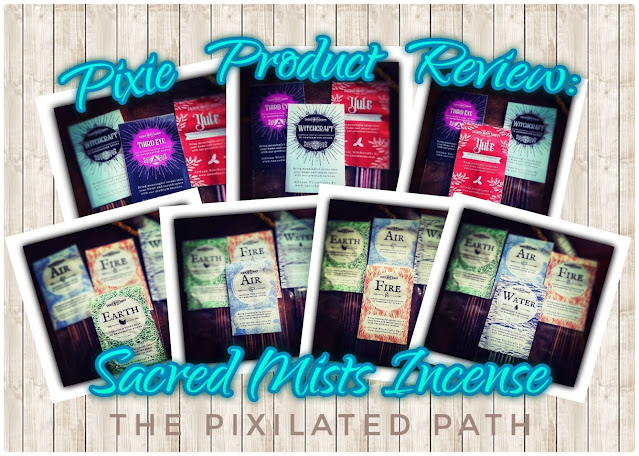 Pixie Product Review: Sacred Mists Incense As a witch, incense is one of those things that people expect to find amongst our vast array of witchy supplies because it helps to set the stage, on various levels, for one's spiritual and/or magical endeavors.  The metaphysical properties of the scents themselves can help to set desired intentions and help to cleanse/clear negative energies; they can also help us to focus our minds on our purpose. The smoke itself sets the atmosphere, and can even be used as a divination tool. Other than all of that, it just makes the house smell delightful! I recently discovered that my own incense stores were running low, so I went in search of some new ones to try.